Bangladesh is a country located towards the east of India and on the Bay of Bengal. The average life span of a man in this South Asian country is around 70.5, while that of a female is 73.

Infectious diseases are one of the reasons of death in Bangladesh hundreds of Bangladesh nationals each year. However, the country performs a lot better in terms of overall health status as compared to other countries with widespread poverty, including Zimbabwe, Kenya, and Mozambique. In this article, we will go through to what are the major cause of death in Bangladesh.

One of the primary reasons behind improved health conditions in Bangladesh is access to healthcare. Even though the country is still not that updated in terms of the latest medical technology, Bangladesh nationals can easily travel to their neighboring country, India, to seek medical treatment. 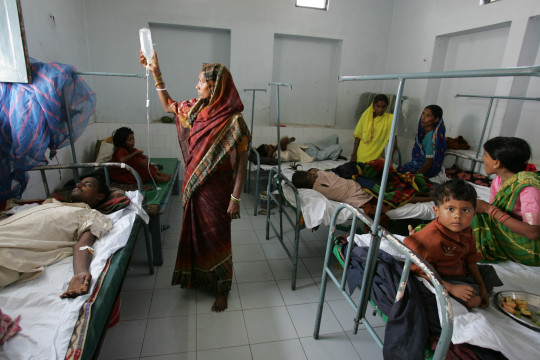 Top 10 Causes Of Death In Bangladesh

Some of the leading causes of death in Bangladesh are discussed below.

Tuberculosis: TB is the number one killer in Bangladesh, with almost 70,000 people dying each year because of it. TB is a serious bacterial infection that primarily affects the lungs, and as a result, the patient suffers from persistent chronic cough, fever, and fatigue. A majority of TB patients may not even suffer from any symptoms at the start as they may have latent infection. But people with active infection require long term treatment, primarily in the form of drug therapy.

Influenza: Influenza, commonly known as flu, kills around 69,000 people in Bangladesh each year. It is a common bacterial and viral infection that results in flu-like symptoms such as muscle ache, fever, headache, loss of appetite, cough, runny nose, congestion, sweating and chills. An infection that reached the lungs is known as pneumonia, which is treated with the help of medications. Influenza and pneumonia may prove fatal if not treated on time.

Lung Diseases: Any condition that affects the structural or functional features of the lungs fall under the category of lung diseases. It is estimated that around 68,000 people in Bangladesh die of lung diseases each year. Bronchitis, pulmonary hypertension, pneumonia, respiratory ailments, COPD, respiratory tract infection and asthma are some of the common diseases of the lungs. These diseases reduces the ability of the patient to breathe normally and the total lung capacity is greatly reduced.

Coronary Heart Disease: It is estimated that CHD kills more than 50,000 people in Bangladesh in a year. Also known as coronary artery disease, CHD ends up damaging the major blood vessels of the heart and restrict the normal flow of blood to the heart and different parts of the body. Treatment can help improve the condition of the person, but CHD cannot be cured completely. The blood flow is restricted or reduced because of the narrowing of the arteries, which is a leading cause behind chest pain and heart attack.

Stroke: An individual suffers from a stroke when the supply of blood to the brain is abrupt stops. It is a serious cerebrovascular accident and a medical emergency that requires immediate treatment. A person suffering from stroke may experience numbness of the face, legs or arm and paralysis. In addition, difficulty in breathing, taking or understanding things are some of the other symptoms. It is estimated that almost 49,000 people die in the country each year because of stroke.

Kidney Disease: Any condition that affects the ability of the kidneys to filter waste out of the body falls under the category of a kidney disease. Kidney diseases kill more than 25,000 people in Bangladesh each year. There are different types of kidney diseases and each has a separate reason behind it. For example, chronic kidney disease may result because of a variety of reasons, including the growth of cysts in the kidney, hypertension, diabetes, glomerulonephritis, nephropathy and congenital deformities.

Oral Cancer: Also known as mouth cancer, oral cancer kills almost 15,000 people in Bangladesh each year. It is a cancer that develops in any part of the mouth or the oral cavity, be it gums, tongue or the palate. People suffering from oral cancer commonly observe the appearance of red or white bumps in the mouth, especially on the gums. Oral cancer treatment involves the use of radiotherapy and surgical intervention. Alcoholics and those infected with human papillomavirus (HPV) are at an increased risk of oral cancer.

Lung Cancer: Cancer that begins in the lungs kills more than 10,000 people in Bangladesh each year. Lung cancer primarily affects passive and active smokers and those who inhale toxic substances. There are two types of lung cancer – non-small cell carcinoma and small cell carcinoma. Lung cancer symptoms include persistent chronic cough, wheezing, weight loss and chest pain. It is usually treated with the help of chemotherapy, radiation therapy and surgery (in case the lymph nodes are also affected).

Breast Cancer: This form of cancer kills more than 7,000 women in Bangladesh each year. Cancer, in this case, starts in the cells of the breasts. It rarely affects males as well, but is common in women. Breast cancer patients observe a change in the shape and size of their breasts and nipples, appearance of a lump in their armpit because of infection or discharge from their nipples. It is treated with the help of chemotherapy, radiation therapy and surgery (mastectomy).

Cervical Cancer: This form of cancer, which develops in the lowermost part of the uterus, kills around 6,500 women in Bangladesh each year. Women suffering from cervical cancer may experience abnormal discharge between periods, abdominal pain, and abnormal white discharge. It typically affects women aged above 40 and is treated with the help of surgery, chemotherapy, and radiation.